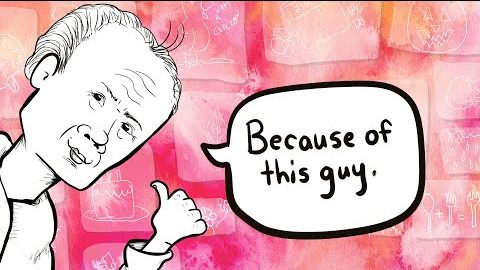 Every year on January 1st we all join to celebrate the new year, making resolutions, starting diets and cracking open brand new organizational planners that we’re sure will finally make this year the BEST year of our lives! But have you ever wondered why the new year starts on January 1st? Where I am, it’s the middle of winter, everything around me is dead and dark and gloomy, if not covered in inches of snow, and this seems like the absolute last time of year I’d pick to start a new one. If it was up to me, I’d definitely go with spring when all the trees and flowers are blooming and beginning their new lives. But there’s gotta be a good explanation right? Right. So let’s figure it out together. I’m Yvonne Page Illustrates and on this channel, I  research some of life’s most burning questions and then share what I learn with you. If learning new, random things sounds like something you’d enjoy, you should definitely subscribe. But for now, let’s get started answering the question of WHY January is the first month of the new year.

Starting the new year on January 1st all began back in 45 B.C.E. with the Julian calendar, which was created by Julius Caesar with help from an Alexandrian astronomer, Sosigenes to replace the traditional Roman calendar, which followed a lunar cycle. Caesar and Sosigenes decided it would be more accurate to follow a solar calendar like the Egyptians did, and in doing so, they determined that each year was 365.25 days long. When inventing his calendar, Caesar decreed the new year would start on January 1 each year and that was that. Very simply, we celebrate the New Year on January 1st because a Roman dictator from thousands of years ago said so. I mean, of course, it wasn’t just that. History is never that simple is it?

First of all, the reason Caesar decided January would be the first month was because it was named after the Roman god Janus, ruler of doors and gates, with two faces-one looking forward and one looking back. The symbolism of this wasn’t lost on Caesar and he felt like the beginning of January would be a great “doorway” for the new year. Pretty clever right? I mean, I’m not hating it.

BUT during the Middle Ages, celebrating New Year’s Day on January 1 fell out of favor for the simple reason that when calculating their calendar, Caesar and Sosigenes had made a fatal error. That quarter of a day they’d estimated extra every year? Turns out that instead of 365.25 days each year, there were actually 365.242199 days each year. This may seem like an insignificant amount of time but it added up to an 11 minute per year error and by 1000 C.E., seven extra days were just floating around, making it really hard to celebrate new years on January 1. Many people chose to celebrate the new year in March, likely because, like me, they saw that as the time when new life and growth was felt the most. It wasn’t until the 1570s that the error would be fixed. By then there were more than 10 extra days floating around and the Church, under Pope Gregory XIII, commissioned a Jesuit astronomer named Christopher Clavius to come up with something better. In 1582, the Gregorian calendar, named after Pope Gregory, was introduced and used the 365.242199 days number rather than 365.25. It omitted the 10 extra days that year to start everything a-fresh and ever since then, New Years has properly been held on January 1st.

Now-a-days, most of the world uses the Gregorian calendar and celebrates New Year on January 1 but it’s not the rule. Though to many people this date makes sense beyond Caesar’s declaring it to be so, because, for instance, the winter solstice is celebrated in many places at the end of December, observing the coldest and darkest part of the year and celebrating the new start to come. By January the days and amount of sunlight are lengthening and it’s easy to see why, when you look at it like that, it’s a good time for feeling like things are starting anew. Additionally, around this time of year, is when the earth is closest to the sun in its yearly orbit so that’s another argument for starting the year in January.

Now-a-days, though the Gregorian calendar and its 365.242199 days is the most commonly used one, it’s not the only one and because of this, some cultures celebrate the new year at different times. The Chinese calendar, which uses a combination of the solar and lunar calendars and counts 353 to 355 days in a regular year and 383 to 385 days in a leap year, celebrates the Lunar New Year with the new moon that occurs somewhere between January 21 and February 20. They celebrate for about 15 days, until the following full moon. The new year signifies the beginning of spring on the Chinese calendar.

On the Hebrew calendar, Rosh Hashanah is the Jewish New Year. The date varies each September or sometimes at the very beginning of October. Rosh Hashanah celebrates the creation of the world and marks a time for making fresh starts, reflecting on the past year, asking for forgiveness for wrongs they’ve done, considering priorities, and is when Jewish people believe that God balances a person’s good or bad acts over the previous year and decides how the next year will be for them.

The Islamic New Year, called the Hijri new year marks the start of the Muslim lunar calendar, on which a year lasts about 354 days. The date is determined by moon-sighting exercises and scientific and astrological calculations and the date varies yearly but the start of the new year marks the Hijrah, which was when the Prophet Muhammad and his companions began their migration from Mecca to Medina in 622 C.E. after being persecuted and threatened.

The Persian or Iranian calendar has either 365 or 366 days and the new year starts on the spring equinox, usually on the 21st or 22nd of March.

The Ethiopian calendar, likewise has either 365 or 366 days but they celebrate their new year, or Enkutatash on September 11, or September 12 if it’s a leap year. The word Enkutatash means “gift of jewels” in the Amharic language and is celebrated at the end of the country’s long rainy season, when the countryside finds itself covered with yellow daisies.

So there we go, the answer to the question of why we celebrate the new year on January 1st. Essentially, the new year, and the calendar in general is a social construct designed to help us measure time and having a marked date to separate the years is a necessary part of that. I hope you enjoyed learning about the new year with me and if so, please hit the like button and don’t forget to subscribe so you can come back to learn something new with me again soon. Bye!