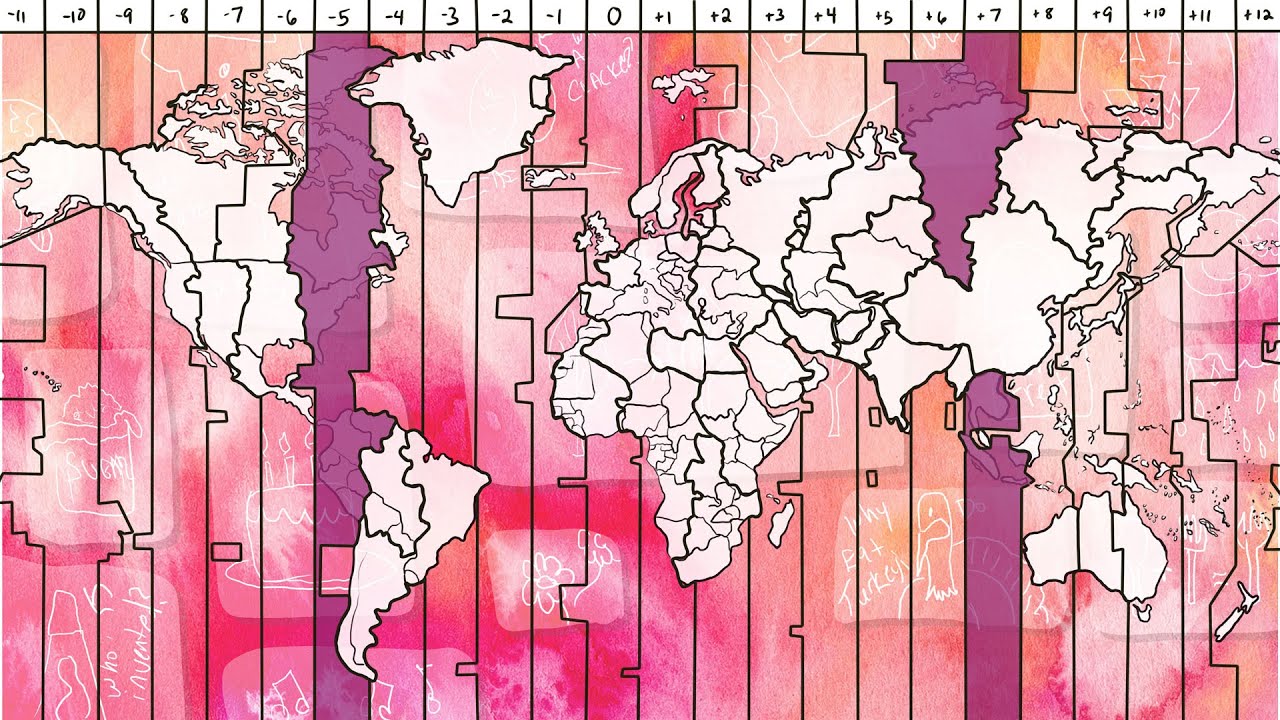 Why do we have time zones? Why is it a different time in China or Australia or even Minnesota than where I live? Do you know the answer? No, I suppose probably not since I doubt you’d be here if you did but that’s not a problem because we can figure it out together! I’m Yvonne Page Illustrates and on this channel I research the answers to life’s most burning questions and then share what I learn with you. So let’s learn about time zones.

First things first- the length of a full day is 24 hours. This is the time that it takes for the sun to move from a particular position in the sky and then return to that exact location again. It’s not actually the sun moving however-it’s the earth. The earth rotates on its axis, taking approximately 24 hours for a complete rotation to occur. And because of this, the sun is in different places in the sky at the same time depending on where you are in the world.

Using this information, in 1878 a Canadian railway engineer named Sir Sandford Fleming proposed a time zone map that would split the world into 24 one hour blocks and would standardize time around the globe.

You see, before this, most places just used their own local times, based roughly on the rising and setting of the sun, using clocks in town squares, on church steeples, etc. to keep everyone in town on track. I guess that means you could be in one town at 6 p.m. and then cross over to the neighboring town where they determined it was 8 p.m. It may never have been that extreme but it was a problem, especially for railroads when trains began traveling around and trying to adhere to certain pickup and delivery schedules. How could they accurately tell someone when to expect a package or meet someone’s train if there were dozens of distinct local times on any given route? And remember, Fleming was a railroad man so he had first hand experience with this frustration.

By the time Fleming proposed the world time zone map, England had already standardized its time nationally, basing their country’s time zones on London time. The United States and Canada followed suit in 1883, at least as far as the railroad system went-it wouldn’t be until 1918 that the Standard Time Act would officially put the use of time zones into play in the U.S. But in 1884 it was agreed upon during an international conference that the world would work together to standardize time with all time zones being based on Greenwich Mean Time, centered around England’s Greenwich Observatory. Theoretically, looking at a time zone map should be simple and straightforward, with 12 equal vertical lines through the map, each section equaling an hour starting in the middle where Greenwich, London lies, and going up or down by hour intervals on either side from there. However, not everyone was willing to get on board with this simplified mapping of time, either because a time zone would break off parts of a country’s borders or simply because they don’t want their country broken up at all. For instance, China should span five different time zones according to the map proposed by Fleming but they stick with only one for the whole country. And some countries in the Middle East and South Asia use half-hour time zones, rather than 1 hour. So for the most part, time now-a-days is standardized with the use of time zones but they’re a bit more complicated than Fleming first proposed. And of course, when you throw Daylight Saving Time into the mix, everything just gets more and more complicated…but that’s another story for another time…

Now here are a few interesting facts about standard time and time zones.

Thanks for joining me today and learning about Time Zones and Standardized time. If this video helped you, please hit the thumbs up button and subscribe to this channel so you can come back and learn more new things with me in the future. If you want to learn more about time, check out my time playlist where I have videos covering all sorts of questions like “What is Daylight Saving Time?” and “How did people measure time before clocks?” and “why are there 24 hours in a day?” so check that out to learn more. Bye!