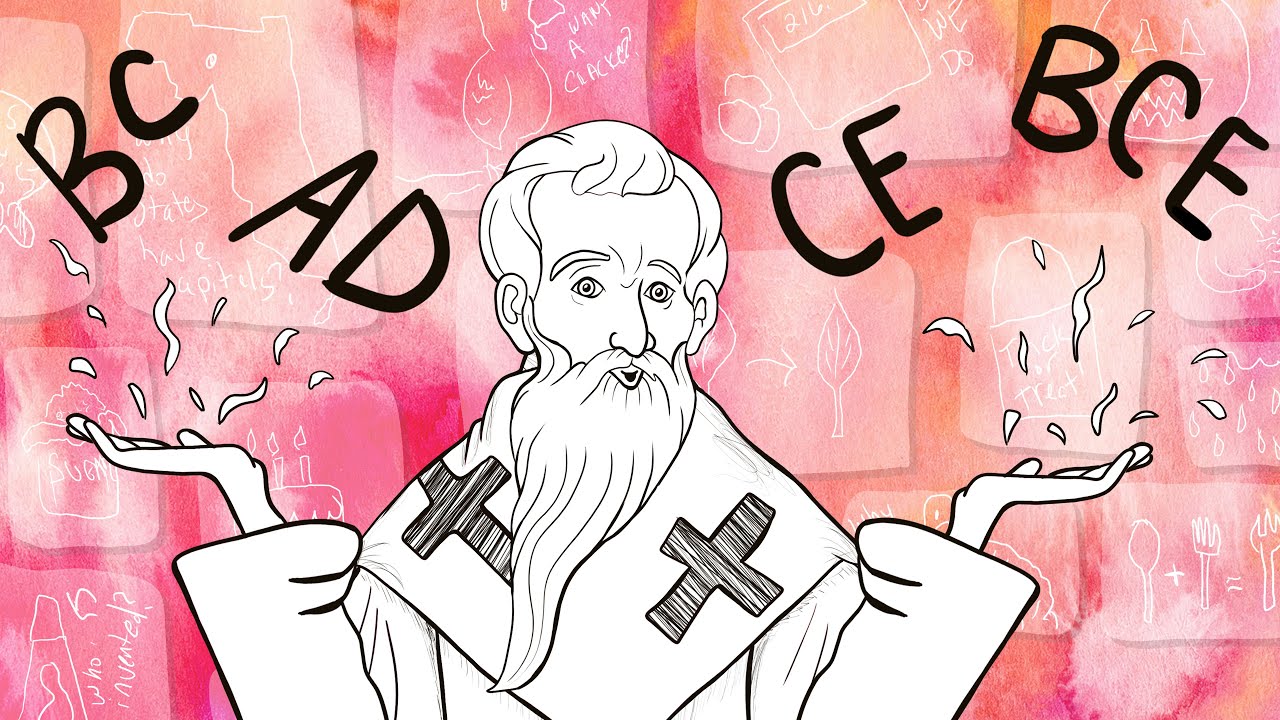 As a little girl attending Catholic grade school, I was told, though honestly I can’t remember if it was the teachers or kids saying it, that B.C. stood for “Before Christ” and A.D. stood for “After Death,” meaning after the time Christ died, and that was how we measured the years. As an unquestioning Catholic gal completely consumed by the Church’s teachings, the fact that the entire world’s counting of years would center around Christianity made perfect sense to me, but at the same time, I’ve always had a few questions and maybe you do too. So if you’ve ever wondered things like, “What do B.C. and A.D. really stand for? And what are C.E. and B.C.E.?” And “if B.C. and A.D. are the times before Christ and after his death, what about those thirty-odd years when Jesus was alive? Did that time just disappear?” And “if B.C. is counted backwards in time, what did people alive in those years call them?” I mean I’m assuming they didn’t magically know to count backwards to the year Jesus would be born, right? So yeah, let’s find the answers to all those questions together now.

Okay, first, the good news, which is after all these years, I was not so far off in thinking that B.C. and A.D. were centered around Jesus Christ. B.C. does, in fact, stand for “Before Christ.” A.D. however, doesn’t stand for “After Death.” It stands for “Anno Domini” or “in the year of the lord” in Latin. What this means is that B.C. counts all time before Jesus was born and the year 1 A.D. started on the year in which he was born, not on the year in which he died. Yay, no need to worry about those 33 lost years then. We can just cross that off our list.

But why? Why is our time counted in years before and after Jesus? Who made that decision and how come we stick with it in a time when, globally, we’re connected enough to know that there are many religions that don’t recognize Jesus Christ as their lord and savior? How is it that we’ve managed to get the entire world to agree that this is the year 2022, exactly 2,022 years after God’s son was born?

Well, that’s a great question, thanks for asking, Yvonne. Turns out we don’t actually know that either. In the year 525 A.D. a Christian monk named Dionysius Exiguus, proposed using Jesus’ birth to count years after being asked to calculate an Easter table to measure when it should be celebrated each year. This was likely the result of him looking at the ridiculously complicated task set out in front of him and thinking “if only we had a proper start date here, this would be a lot easier.” So, as his own personal side project, Exiguus went ahead to calculate the year Jesus would have been born, most likely based on passages from the bible and historical records. Since the Gospel of Luke said that Jesus was about thirty years old after the fifteenth year of the reign of Tiberius Caesar, that would mean that Tiberius had become emperor in the year 14 A.D.  This made it pretty simple to count back 14 years from there and make a pretty good guess as to when Jesus would have been born. He declared that year of birth to be 1 A.D. And no, there is no year zero.

Now, before the B.C./A.D. system was accepted, years were normally counted based on events, leaders, and the order in which they ruled. For example, Egyptians counted the years of a ruler’s reign and then listed these periods in chronological order. There was the Predynastic period, then the Early Dynastic Period, followed by the Old Kingdom, and then the 1st Intermediate Period, and the Middle Kingdom, and so on. The Romans, on the other hand, either counted from the founding of the city of Rome or based on who was consul. The Julian calendar, which revised the Roman calendar, was in use when Exiguus created the new B.C./A.D. system, making it the first calendar to count years with these terms. More than a millennium later, the Gregorian calendar, which we still use today, was introduced and B.C. and A.D. were brought over from the Julian calendar. And the rest, you might say, is history.

Now what about B.C.E. and C.E. then? How do those come into play? Well remember how I was wondering how we managed to get the entire world to base its time on a Christian belief system? B.C.E. and C.E. are the answer to that. C.E. stands for the “common or current era” and B.C.E. stands for “before the common or current era.” Starting in about the early 1700s, these terms began to be introduced, likely because everyone didn’t appreciate the religious undertones that B.C. and A.D. carried. Jewish academics in particular were happy to adopt these new terms, even if the dates themselves were interchangeable, ie. B.C. and B.C.E are the same time periods and A.D. and C.E. are the same time periods. In the 20th century, these revised terms became even more widespread as religious neutrality became more and more important in a global economy. These alternative terms also do away with any need for arguments about whether Exiguus got the year of Jesus’ birth correct, which many scholars argue he did not. Of course, there are many who don’t appreciate the change of style, seeing it as an attempt to erase Christ from history and still others grumble that it does the opposite of erasing him. They argue that using a particular religious icon’s birth to mark the beginning of an era only adds to his significance, rather than diminishing it. Honestly, my opinion is, use whichever terms make you feel more comfortable. Most people probably don’t know the difference anyways and those who do likely understand the interchangeability of the terms.

Now one final question I had in regard to this topic is, does the whole world, in fact, embrace this measurement of the eras, or are there some who, like the ancient Romans and Egyptians, use their own time tables? While most countries around the world now-a-days use the Gregorian calendar as their civil calendar and recognize BC, BCE, AD, and CE, allowing us all to be on the same page in dating things that happen no matter where one is in the world, many cultures and religions still have their own calendar that they follow as well. The Hebrew calendar, for instance, doesn’t recognize Christ’s birth and starts at the time that Jewish people believe creation occurred, about 5,782 years ago and so, according to that calendar, we’re in the 6th millennium, not the 3rd. The Islamic or Hijri calendar and the Persian or Solar Hijri calendar both count year one as when the Muslim prophet Muhammad migrated to Medina, which occured on the Gregorian calendar in 622 A.D. The two calendars count the years slightly differently though putting us in the year 1443 in the Islamic calendar and the year 1400 in the Persian or Iranian calendar. The Buddhist calendar counts year 1 as the year their religion’s founder Gautama Buddha died, making this the year 2562. None of these other calendars care even a little bit about B.C., B.C.E., A.D., or C.E. They’re just measuring the years and eras in their own ways…and in their own time…

So hopefully, that clears things up for you a bit, as it has done for me, and that you’re feeling pretty good about understanding these abbreviations when learning about history. If you found this video to be helpful, please hit the thumbs up button and don’t forget to subscribe to this channel so you can come back and learn something new with me again soon.  In the meantime, I have many other videos about timekeeping in my Time playlist that you might enjoy as well. Bye!