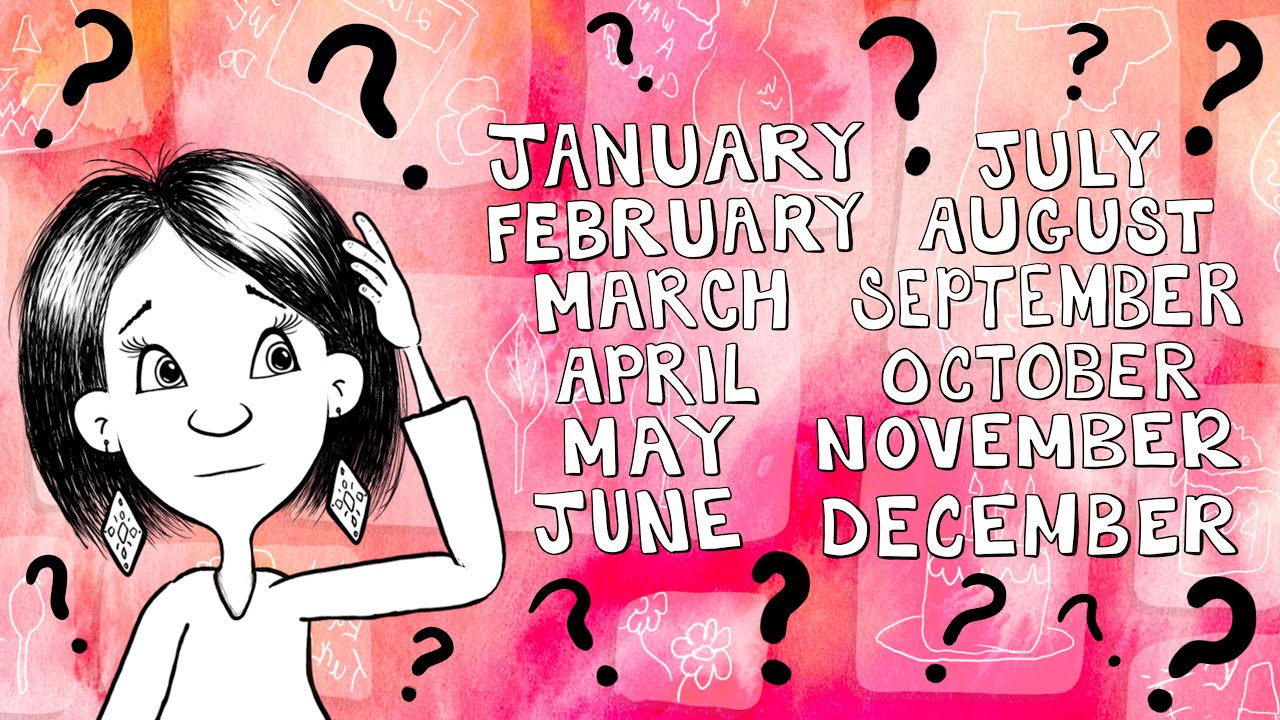 Have you ever wondered why January is called January? Or why any of the months are named what they’re named for that matter? If so, don’t worry, I did some research and I’ve got some answers.

To start, we have to know a few things. Number one is where our calendar came from. We use the Gregorian calendar, which was commissioned in the 1570s by Pope Gregory XIII. It was based on the Julian calendar, which was created by Roman dictator Julius Caesar in 45 BCE. And THAT calendar was based on the Roman calendar, invented by Romulus, the first king of  Rome, in around 753 BCE. Knowing this information is important because the names of the months were, for the most part, established with the Roman calendar.

Now, originally in the Roman calendar which was a lunar calendar, meaning it was based on the moon’s movements, there were only 10 named months, not 12 like we’re used to. Plus, their year started in March so they considered winter, the months we know of as January and February, to be unimportant since the Roman government and military were not active during that time, so they just didn’t bother naming it. It wasn’t until the second Roman ruler, Numa Pompilius, came along and made that period two separate months that they’d get names. So what does each month’s name mean? Let’s delve into the meaning and history of each of them, one by one.

January– January was named after the Roman god Janus. Janus had two faces so he could see both the future and the past and he was the god of doors. Because of the symbolism of the past, future, and doors, when the Julian calendar was created, Caesar switched the new year to start on January 1st rather than in March in honor of Janus.

February– This mini-month was named after the Februa festival, an ancient Roman festival of purification. In the Roman calendar, the new year began in March so this festival would have been a way of preparing for the new year. Fun little history tidbit here: Since the Roman calendar didn’t correspond to the solar year and only had 355 days instead of 365, when he named January and February, Pompilius also added another month called Mercedinus, which would be inserted into the middle of February every other year and would extend the calendar by about 22 extra days on those years.

March- Originally the first month of the year in the Roman calendar, March was named after Mars- the god of war. The month was filled with festivals that honored him. The planet Mars was also named after this god because of its reddish color that reminded the Ancient Romans of blood which, of course, made them think of war. In Rome, the month was called “Martius” and it was only changed to March in English.

April– How April got its name is up for debate and there are a few theories. One is that it was named after the goddess Aphrodite but it’s also possible that it came from the Latin word “Aprillis” which means “second,” since April would have been the second month of the year in the Roman calendar, or that it came from the Latin word “Aperire” which means to open, representing the opening of flower buds and the like in the spring. In Rome, the month was called “Aprilis.”

May– Maia, a goddess, was the daughter of Atlas and Hermes. She was an earth goddess, known for nurturing, and growth, which makes it easy to see why this particular spring month would have been named after her. In Rome, the month was called “Maius.”

June-June’s name comes from June, the wife of Jupiter who was an ancient goddess of marriage and childbirth. It’s likely that this month was named after her because even back in Ancient Rome, this would have been a popular time for weddings, just like it is today. In Rome, the month was called “Junius.”

Side note: There are some debates about whether the months of May and June were actually named after goddesses or whether they were named after the words for the two divisions of the Roman male citizen bodies- maiores for elders in May and iuniores or juniors for June.

July- July wasn’t always called July. At first it was the month of “Quintilis” which is Latin for “fifth” since it was the fifth month of the year on the Roman calendar but when Julius Caesar was assassinated in 44 BCE, the month was renamed after him since it was his birth month. This would be the first time a month was named after an actual person rather than a god.

August- Originally called “Sextilis,” since it was the sixth month of the Roman year, August was renamed to honor Augustus Caesar. Augustus was Julius’s nephew and he became the first emperor of Rome. Augustus’ birthday was not in August but this was the month that he first became consul and subjugated Egypt.

September, October, November, and December- These months were named respectively for the Latin words that meant the 7th, 8th, 9th, and 10th. Unfortunately, when the Julian calendar changed the start of the year to January, these names stopped making sense, and there were several emperors who tried to change some of these months’ names, like Domitian who renamed September to Germanicus in honor of his victory over Germany and October to Domitianus after himself. Both of these months quickly reverted back after his death. Another ruler, Commodus, tried to rename all the months, mostly in honor of himself. His changes also did not remain in place after his death so instead we’ve just continued having the last four months of the year being named after numbers that are no longer in line with the calendar.

Okay, so that explains how all our months got their names…in English at least. Since the  Romans spoke Latin, along with a few other languages and dialects, many of the names were based in Latin. Since many of our language’s words are also derived from Latin, the names of the months remain the same or very similar to what the Romans originally called them. This is also true in many other languages so even though our names for months aren’t all exactly the same, they’re often quite similar. For instance, in French, January is janvier, it’s Januar in Germany, and januari in Dutch, Indonesian, Swahili, and Swedish! This isn’t always the case though. In Turkmenistan in 2002, the government made a law to change the names of the months and the days of the week. Previously the month names were very similar to what we’re used to but they were changed to represent Turkmen culture with an emphasis on the president’s ego. January or Yanwar became Turkmenbasy, for instance, which means “the Leader of Turkmen” which was the adopted name of Saparmurat Niyazov, the Turkmenistan president. Six years later though, Niyazv had died and the old names were restored and are once again very reminiscent of the original Latin names.

What Percentage Of English Words Are Derived From Latin?: https://www.dictionary.com/e/word-origins/